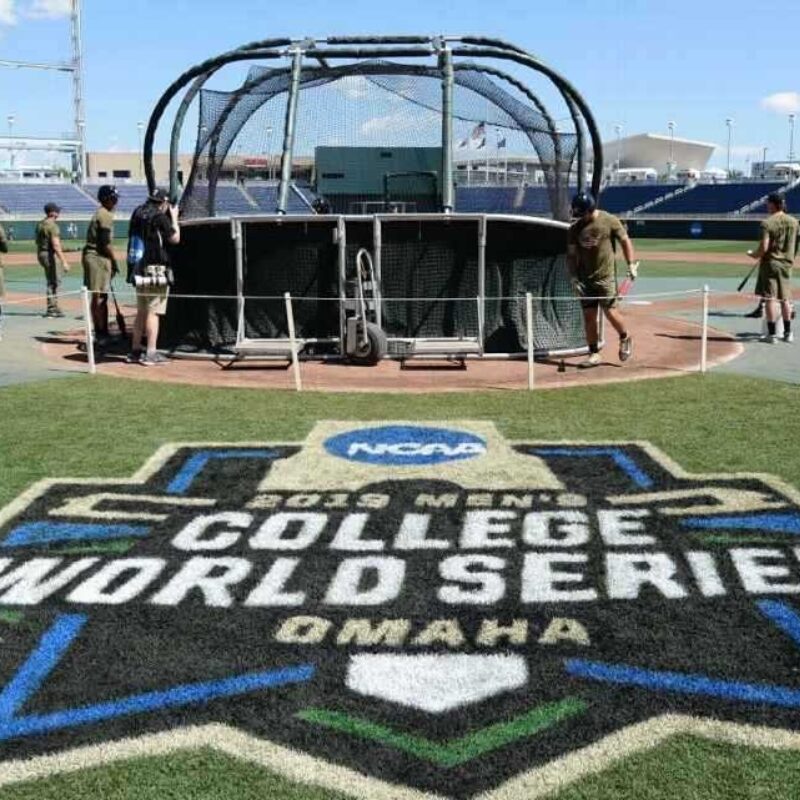 It has been nearly 90 days since Omaha had its guts ripped out.

It happened at 3:07 p.m. CT on Thursday, March 12. That's when the email and tweet went out from NCAA headquarters in Indianapolis.

It read: "Today, NCAA President Mark Emmert and the Board of Governors canceled the Division I men's and women's 2020 basketball tournaments, as well as all remaining winter and spring NCAA championships. This decision is based on the evolving COVID-19 public health threat ..."

While the world was screaming over the shuttering of postseason basketball less than a week before March Madness was supposed to have tipped off, the citizens of Omaha, Nebraska, home to the College World Series, were focused on the last section of the announcement's first sentence and the longer-range impact many had missed: "... as well as all remaining winter and spring NCAA championships."

"I think we all had that moment where we all said, 'No NCAA basketball tournament! That's impossible!'" said Kathryn Morrissey, executive director of CWS of Omaha Inc., the local organizing committee of the NCAA Division I Men's Baseball Championship. "And then we all had a second moment that was even worse. 'All remaining spring NCAA championships?!' Wait ... was the College World Series just canceled too?"

Morrissey is on the phone from a way-too-quiet corner of downtown Omaha, in her office adjacent to a way-too-empty TD Ameritrade Park. She should be in the throes of preparation, happily sleepless as her staff of four is perpetually on the phone, readying for the arrival of eight college baseball teams and the first of more than 300,000 fans, there for nearly two solid weeks of baseball.

Instead, Morrissey has spent her time since March 12 on those same phones with season-ticket holders and corporate partners, people who either want their money back or are expressing their frustration that the natural rhythm of their lives has been wrecked. The College World Series, which would have started Saturday, was canceled because of the coronavirus pandemic.

Omaha has hosted the College World Series every year since 1950. During that time, families have handed down their CWS season tickets as heirlooms, grandparents sitting with grandchildren in the grandstand until one day making the grand gesture of transferring ownership of those tickets through last will and testament.

New Year's ... Valentine's Day ... spring break ... Memorial Day ... College World Series. Now they call their old friends at CWS of Omaha Inc. asking how the NCAA could have canceled this so long ago and what in the world they are supposed to do now with the entire second half of June.

Morrissey handles them all with grace and understanding. The understanding comes easy for her. She knows how they feel because she is one of them. She sits beneath a framed yellowing pennant that reads: "One Millionth College World Series Fan." It was given to her grandfather as he passed through the turnstiles of the old Johnny Rosenblatt Stadium in 1972, there to watch USC and Fred Lynn defeat Arizona State and Bump Wills. She has her grandfather's pennant because she had gone to so many CWS games with him and loved the event so much. That love extended into her adulthood, joining the CWS of Omaha board in the late 1980s and ascending to executive director.

"I grew up just across the [Missouri] river, in Council Bluffs, Iowa. You could see the lights from Rosenblatt Stadium glowing off the hill at night," she says of the ballpark that hosted the College World Series from 1950 to 2010.

"That's why in my wildest dreams I never thought we would be where we are today. If history has taught us anything, it's that for 70-plus years this event is going to happen, come whatever. We have had heat waves, tornadoes, cold snaps. We had a hundred-year flood just recently. It's always there. Every June. It has been my entire life, like a member of the family. That's how it is for everyone here. So, yes, there is a lot of emotion attached to this for so many."

There is also a lot of money. When Omaha Mayor Jean Stothert held her post-cancellation news conference in March, she pegged the economic loss at $70 million. On opening day of the 2019 College World Series, the 15,000 hotel rooms in Omaha were at 95% capacity. TD Ameritrade Park and the surrounding Omaha Baseball Village, a pop-up city of baseball-themed shops, bars and fan fun zones, each employ hundreds of part-time workers for nearly a month, beginning with the Big Ten baseball tournament and rolling into the CWS. This year was bringing the added bridge event of the 2020 MLB draft, scheduled for June 10-11 in Omaha's Holland Center, a few blocks south of TD Ameritrade. But that too was taken away by the coronavirus pandemic and made into a virtual event.

The U.S. Olympic swimming trials were scheduled to begin June 21 at the CHI Health Center, the arena that shares the parking lots with TD Ameritrade, the fourth time those trials crossed over with the CWS. Now they have been rescheduled for 2021. That same building was also to have hosted first- and second-round NCAA men's basketball tournament games in March.

"All of those cancellations came so fast, all over the top of one another, that it was just overwhelming for the entire city of Omaha, and it came right in the middle of what we were all having to come to grips with in adjusting our personal lives too," says ESPN baseball analyst Kyle Peterson.

Peterson is an Omaha native. He grew up attending games at Rosenblatt Stadium with his family and came back home to play in two College World Series as a Stanford pitcher. While he was fielding fly balls before the Cardinal's opening game of the '97 CWS, he found out he'd been drafted 13th overall by the Milwaukee Brewers. He ran in from the outfield to celebrate with his family in the stands.

Now, in addition to calling the CWS for ESPN, he serves on the board of CWS of Omaha.

Having had so much time to prepare for it, "I think that maybe you won't see a lot of emotional anguish among Omaha residents this weekend when the Series would have started," Peterson says. "We've had three months to get that out of our systems, so the shock of that wore off a long time ago. Now it will just be sadness. I think what you'll feel if you are around town is just a sense of people being lost. Their equilibrium will be off. A big piece will be missing from our lives for a couple of weeks."

Paul Mainieri, LSU's head baseball coach, has led the Tigers to Omaha five times, winning the 2009 championship. He also coached Notre Dame to its second CWS berth in 2002. The best way he knows how to describe it?

"The family reunion has been canceled," he says.

Family like Dennis Pate, who took over as executive director of Omaha's Henry Doorly Zoo in 2009, when the College World Series was literally across the street at Rosenblatt Stadium. That big glass sphere you could see in the background during every Series before 2011? That's the zoo's Desert Dome. Now what's left of Rosenblatt -- the foul poles, home plate, some of the old colorful grandstand seats -- is engulfed by zoo parking lots. Pate, who once had to convince a group of LSU fans that, no, they couldn't borrow a real tiger to take over to Rosenblatt, now likes to stroll over to the remnants of the old ballpark each June to talk with fans attending games at what he still calls "the new stadium," TD Ameritrade. The zoo just reopened on June 1.