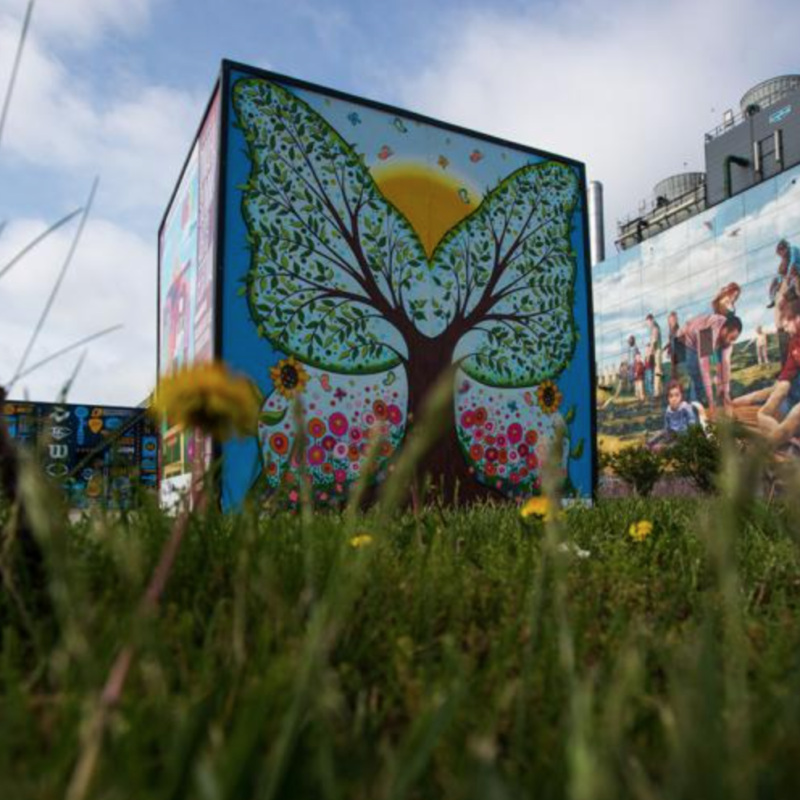 An Omaha artist appropriately named Joy has been spreading hugs far and wide despite the pandemic.

She drew an image of humans embracing, put it on circular shrinky dinks (polystyrene used to make jewelry and other art) and heated them to create small raised disks.

Then Joy, last name Cotton, started asking friends, co-workers and family a heartfelt question: “Do you need a hug?”

Given recent events, they usually answered yes, so she gave them her “hug buttons” to provide noncontact comfort.

Now Cotton’s artistic hugs are available to anyone who visits a new “mural cube” at 24th and N Streets near South Omaha’s Plaza de la Raza.

Organizers behind the Omaha Summer Arts Festival are placing the cubes at seven downtown and near-downtown locations as part of this year’s mostly virtual event.

“The Summer Arts Festival really wanted to provide an art experience that was interactive since there’s not a street festival this year,” said Heidi Walz, senior project manager for VGA Group, which coordinates the nonprofit event.

The goal is for individuals and families to take the cube tour, stopping to take pictures they might post on social media during this year’s festival, which has been expanded from one weekend to a full month.

Work from 22 local artists is featured on the 8-foot-by-8-foot cubes. Each has three murals and a festival poster. Three sides of an additional cube are devoted to a coloring sheet that the public can paint with the artist’s assistance at the downtown Omaha Farmers Market on June 5.

Participating muralists were chosen from about 50 applicants and each received a $1,000 stipend.

“The artists are so engaged and so excited about having their work on public view,” Walz said. “They have all been sending me selfies: ‘This is me putting the plywood in the back of my car.’”

For Cotton, 24, the project represents a return to creating after a few years off. In her day job, she’s a gallery supervisor at Kaneko.

She was heavily involved in art during high school as a participant in the Kent Bellows Mentoring Program at Joslyn Art Museum, and studied art for two years at Metropolitan Community College. But she fell away from the pursuit.

She said she’s thrilled to be one of the muralists, especially because it allows her to expand her hugs project. When she considered what to put on her mural, the hug image seemed like a logical choice.

Muralist Jair Rodriguez, 28, considers his selection for the cube project as affirmation.

Though he has a degree in graphic arts from Bellevue University and has worked on the South Omaha Mural Project, he still occasionally has doubts about his avocation.

He said he has attended the Summer Arts Festival almost every year and thought that maybe someday, he would be a participant, but he wasn’t ready yet.

“When they told me they wanted me and my art to be featured, I was pretty ecstatic,” he said.

He got a special honor. FNBO is a festival sponsor and wanted the cube on its plaza to represent coming events downtown.

Rodriguez first submitted a summer nature scene, but festival planners saw something that prompted them to ask if he could come up with one to represent the U.S. Olympic Swim Trials in Omaha.

Walz said the artist was a little apprehensive, but they were convinced he was their guy.

“We loved Jair’s original image. It had a swirling blue sky that looked like waves,” she said.

When he offered his revamped entry, with vivid colors and two swimmers, he wanted it to convey that when competitors are in the zone, the world around them doesn’t matter.

“This is perfect,” Walz said she told him. “You hit it out of the park.”

The festival runs through June 20, with a virtual art sale, both virtual and in-person concerts, opportunities for bike tours, a public student art installation and more. For additional information, visit summerarts.org or watch The World-Herald for more stories on the event.

It became apparent earlier this year that the festival couldn’t be on the streets again. Too much planning is involved to make that call at the last minute, Walz said.

But she’s delighted with what planners came up with as a substitute.

“I am so glad we branched out instead of just doing some virtual events,” she said. “We thought ‘Let’s give families a way to have their own arts adventures.’”