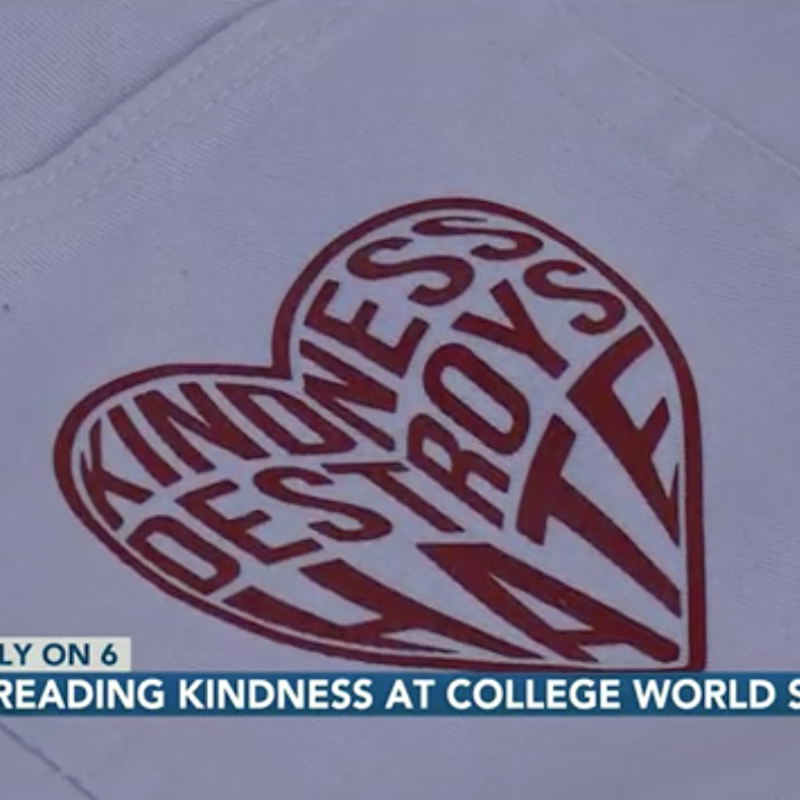 OMAHA, Neb. (WOWT) - Tucked away in the College World Series Baseball Village is Marlon Taylor’s ‘Kindness Shoppe,’ with tables covered in hundreds of colorful shirts, all of them with the same message: Kindness Destroys Hate.

“Our society dictates a lot to us, and I think we need to just kind of get back to just being kind,” says Julie Wyssman, the owner of J’s Coffee and Donuts as she sports a ‘Kindness Destroys Hate’ t-shirt.

“It’s also a message that we just need to spread, cause if we’re nice to each other, everything’s better,” adds Chris Matson, another vendor wearing his kindness shirt as he sells Cutco Cutlery.

Marlon Taylor began spreading his message back in 2020, it was the start of the COVID-19 pandemic and lockdowns, and thousands were taking to the streets, calling for racial justice through protests.

Some of which, turned violent, including in Omaha when James Scurlock was shot and killed.

“When that young man got shot downtown, it really affected my heart and I said to myself, I don’t care what anybody else is doing. I’m going to do something to change the atmosphere of downtown Omaha.”

In the midst of the 2020 chaos, Marlon could be found weekly in the Old Market, handing out lunches, sandwiches, fruit, chips, and water. They were for anyone who wanted it or needed it, all in an effort to spread kindness.

“It wasn’t about black, white, yellow, brown, it wasn’t about old young, it wasn’t about rich or poor,” Marlon says. “If you walked by me, please take this. I called my little one-man mission ‘kindness destroys hate’ because that was my goal. Here in the middle of all this racial outcry in America, is a person of color, standing downtown and being nice to everyone.”

As he continued sharing meals and spreading joy, soon came a group of volunteers.

For the sake of cohesiveness, Marlon created t-shirts for his volunteers that said “Kindness Destroys Hate.” It didn’t take long for people to start asking if they could buy the shirts from him.

It all started there, and now, his message has grown massively. He’s sharing it at his CWS booth for the second year in a row.

Marlon has also sent shirts to places like Scotland, Australia, and places in Europe. He says he never expected a simple t-shirt to have this big of an impact.

“I just wanted to help my city, and like I said earlier, I had no idea that me helping my city was something that was helping the world.”

“You know, it’s back to basics, it’s being a good human,” Wyssman says.

“It speaks for itself even, Kindness Destroys Hate. You kill people with kindness,” says Wyssman’s employee, Drew Carlson.

“Be kind to people, treat people with respect, they’re going to treat you the same way,” Matson adds.