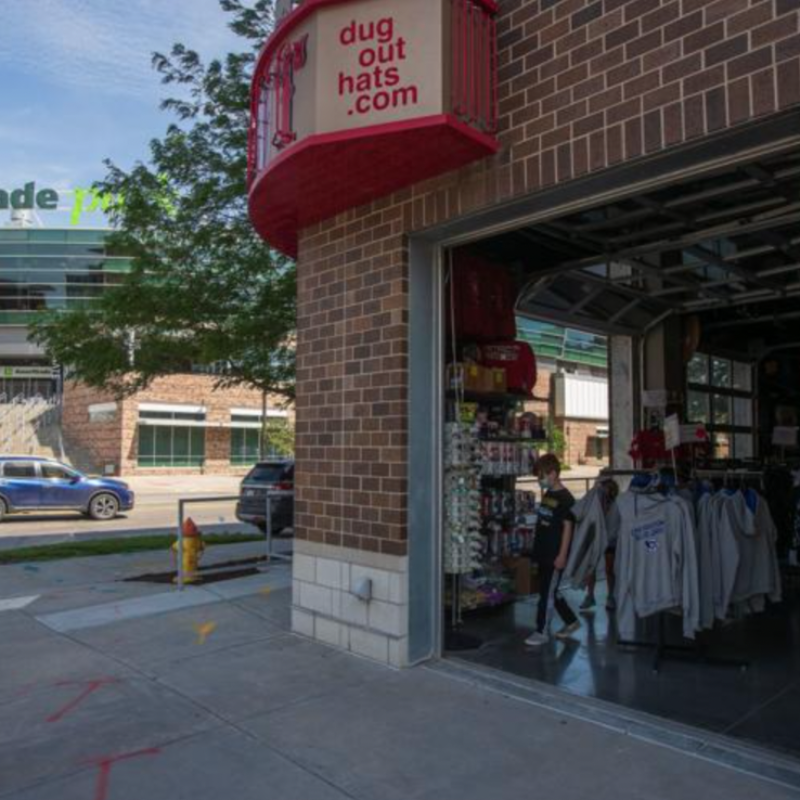 Since the days snow cone and pop stands lined streets around old Rosenblatt Stadium, Muzzy or his sons have supplied ice to College World Series vendors.

Seven decades in, that seamless streak has ended, along with a roughly 350-ton ice order and about half the revenue Muzzy Ice Service typically brings in annually.

Bars and diners surrounding TD Ameritrade Park — including Rocco’s Pizza & Cantina and Blatt Beer & Table — won’t get their typical bump either. CWS crowds can account for 40% to 50% of their yearly sales. The nearby Capitol District said sayonara to its projected $2 million two-week stretch.

And don’t forget nonprofit beneficiaries such as Hope Center for Kids and Ryan our Lion, which have gotten untold exposure and money donations after being spotlighted in the Omaha Baseball Village’s Flying Flags for Charity ritual.

Big, small, commercial and nonprofit businesses alike are taking a hit financially in this year’s absence of the NCAA baseball championship tournament that each summer since 1950 has delivered a money-making lineup of eight college teams, their supporters and major league fanfare.

Sure, the festivities will make a comeback in a COVID-safe season. But for now, instead of 18-hour days catering to sports crowds, businesses and scores of pop-up vendors in and around the home of the CWS are exploring ways to recover from the 2020 loss of an event with an estimated $70 million overall economic impact to the city.

At least one fan magnet, the Dugout apparel store, decided to call it quits amid uncertainty about when crowds will return. After 24 years of relying on CWS sales for up to 60% of its livelihood, the Dugout will close next week.

Other neighboring commercial venues are planning celebrations later to help regain momentum, while some are resigned to calling it a rebuilding year.

“There really is no playbook for this,” said Fred Suarez of the Old Mattress Factory Bar and Grill.

This year’s CWS is but the freshest on the pileup of casualties caused by the COVID-19 pandemic. Out this year also was the Berkshire Hathaway shareholders extravaganza, the U.S. Olympic Swim Trials, early rounds of the NCAA basketball tournament, and a newbie to town, the Major League Baseball draft.

But the CWS — which last year drew 332,054 fans to 15 games spread over 12 days — is particularly crucial to downtown retailers that built business models around the event’s long-term stay guaranteed by an unprecedented 25-year contract secured in 2008.

Take the Blatt, whose name itself is a tribute to local baseball nostalgia. Co-owner Mike Kelley says about 40% of its annual sales come during the series.

Sister ice cream business Zesto, which followed the CWS from the old Rosenblatt neighborhood, is almost entirely dependent on tourney traffic. This year, Zesto’s walk-up window was to relocate to a more prominent spot (a bay across from the stadium that became available after a retailer left). Kelley said the move will still happen, but there’s no rush now that COVID stole 2020 tourism.

“The CWS is a game-changer,” Kelley said. “It drives everything down here.”

Concurring, Dugout owner Rich Tokheim said his store, across the street from the stadium’s front gate, has sputtered along every year waiting for June.

“The CWS is like steroids for the business,” he said. “This year the steroids aren’t there.”

At the Mattress Factory, some tables and wedding event space have reopened, but owners said they miss the “significant” boost from the Omaha Baseball Village, which pops up in adjacent parking lots each CWS.

For students, teachers and other hires, it’s a way to earn a bundle during a short stretch of long days. Peters, whose own nine kids grew up around the tent city, can’t put a value on friendships and partnerships formed during those days.

DiGiorgio’s Sportswear has two village booths and also sets up at the annual pep rally that launches the related youth Slumpbusters tournament that ordinarily draws more than 700 teams and their families from more than 40 states.

Tim DeGeorge said his business will miss up to 15% of annual income without the annual traditions. “It’s like a bonus time; it’s going to hurt.”

DiGiorgio’s made up some loss by pivoting to COVID-related mask-making. At one point, the retailer was producing up to 1,000 masks a day. “It helped with the cash flow,” said DeGeorge.

While Baseball Village may be the most widely known party place for CWS-goers outside the stadium, the city last year approved 15 other permit sites for activities, said City Planning Director Dave Fanslau.

Finance Director Steve Curtiss said the city this year is out up to $8 million in sales, restaurant, hotel and rental car taxes typically generated during the baseball tourney.

Meanwhile, the area’s roughly 15,000 hotel rooms typically would be 85% occupied during the CWS stretch. Steve Hilton, who heads the Metropolitan Hospitality Association, said the pandemic, overall, has severely cut into months of business. He estimated that CWS tourists account for about 15% of the average hotel’s annual revenue.

There’s no way to recover those lost rooms, Hilton said, but he’s counting on Omaha officials to step up efforts to brand the city as a standout “staycation” option to lure more post-pandemic visitors.

Brian Wallingford, executive director of the downtown Capitol District, said about “every single space” within the district’s Marriott Hotel, eight restaurants, eight bars and its apartments had been booked for the baseball series.

He said district representatives had projected gross sales of about $2 million during the CWS.

Now they’re brainstorming ways to recapture momentum, Wallingford said, including a party later that “rewinds” the calendar to celebrate St. Patrick’s Day and other lost occasions.

“This has given us time to come together as a team, to recalibrate our goals,” he said.

About 20 nonprofit groups that work at concession stands inside TD Ameritrade also must make other arrangements to cover funds they would normally raise for youth sports, clubs and other activities.

For the past decade, Andy Potter, president of All4Dancin, has been organizing parents to work the Diggity Dog stand on the first-base side during the CWS. His crew has changed over the years to include parents of athletes from a variety of schools as well as dance clubs.

Long, sweaty days serving up brats and beers for baseball patrons pays off in 11% of the group’s booth sales, Potter said. He said last year’s $35,000 CWS gain went to schools and organizations to cover kids’ travel, equipment or other costs.

The nonprofit also earns money by working concerts and events at the CHI Health Center. Without this year’s cut of concessions, Potter said parents will pay out of their own pocket. “Or, kids may not dance as many dances, they may not travel as much.”

Other local charities missed out on a shot at shining during the annual Flying Flags ceremony organized by Peters and her Baseball Village team. The Hope Center for Kids last year was among eight nonprofits selected to share their story and mission.

“It’s a ripple effect for nonprofits,” he said.

Lindsay Austin’s 8-year-old son, Ryan, who suffers from the extremely rare Hunter syndrome, was featured five years ago in the flag ceremony. He received red carpet treatment for two weeks, including a personal visit from football star Ahman Green, and his nonprofit organization got proceeds from a football toss booth set up inside the village.

The mom attributes a good chunk of the $15,000 to $20,000 that the Ryan our Lion organization has raised each year since to that CWS experience.

Other nonprofit organizations, such as PACE (Police Athletics for Community Engagement) youth sports, are recipients of grants from the College World Series of Omaha Inc. Kathryn Morrissey, executive director, said CWS Inc. money is tied to tournament revenue, so next year’s grant-giving is uncertain.

Meanwhile, all those typically immersed around this time in baseball fever are waxing nostalgic as well as looking at what 2021 might look like.

Jimmy Cerone, one of the 11 children of Muzzy Cerone, who founded the ice service, said he, wife Shelli and brothers Mike and Ronnie expect to pick up again next year supplying semitrailers of ice to vendors in a tradition that their dad began back in the 1950s.

Cerone has occupied his time working at his other job at Rotella’s Italian Bakery, but he misses the chaotic CWS stretch that rekindled friendships and boosted business profits.