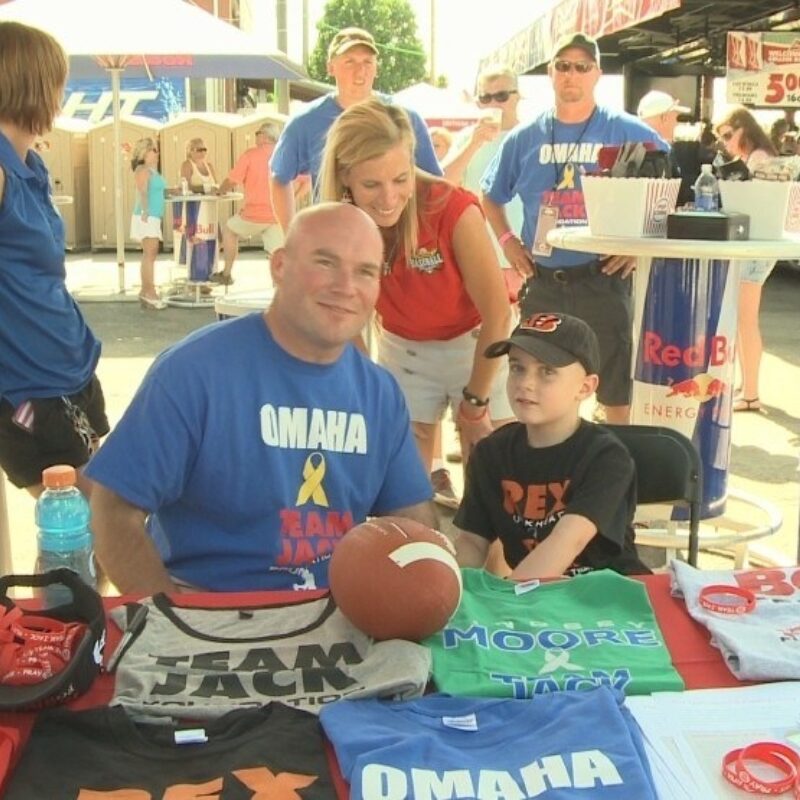 OMAHA (kptm) - A 7 year-old brain cancer patient known around the world for running a 69-yard touchdown is finishing his chemo. Fox 42 talked with him at the College World Series about his last treatment.

Jack Hoffman's first experience at the College World Series is a red carpet treatment. Signing autographs, taking photos with fans, even walking thru Omaha Baseball Village with his own security team. "It's awesome," Jack says.

The world was first introduced to 7-year-old Jack Hoffman during the Husker's spring football game. In front of 60,000 fans quarterback Taylor Martinez gave the ball to Jack. He ran to the end zone and the team celebrated his touchdown. Since then more than 8 million people have viewed the run on YouTube. He's also met the president, "he was nice."

He's even been honored on a trading card by Upper Deck, "we're trying to do the most amount of good possible with the blessings he's had in his life and you know meeting the president, the run, the Upper Deck trading card. How we look at it I guess is another opportunity to try to shift the focus of the disease, to try to draw national attention for this devastating illness," his father Andy says.

While he says he likes signing autographs and meeting fans he's more excited for tomorrow, his last day of chemotherapy. "I'm glad that it's the last one tomorrow," Jack says.

To celebrate, he and his family are spending the day at the College World Series. "Didn't figure tomorrow night, tomorrow's games would be appropriate, he doesn't always feel the best after treatment so we thought we'd come down a day early and try to catch a game and just kind of be together as a family."

Jack says he enjoys baseball, but the Bengals and Rex Burkhead have a bigger influence on him. "What do you want to be when you grow up? I don't know, a football player," he says.

To join Team Jack in the fight against pediatric brain cancer visit TeamJackFoundation.org