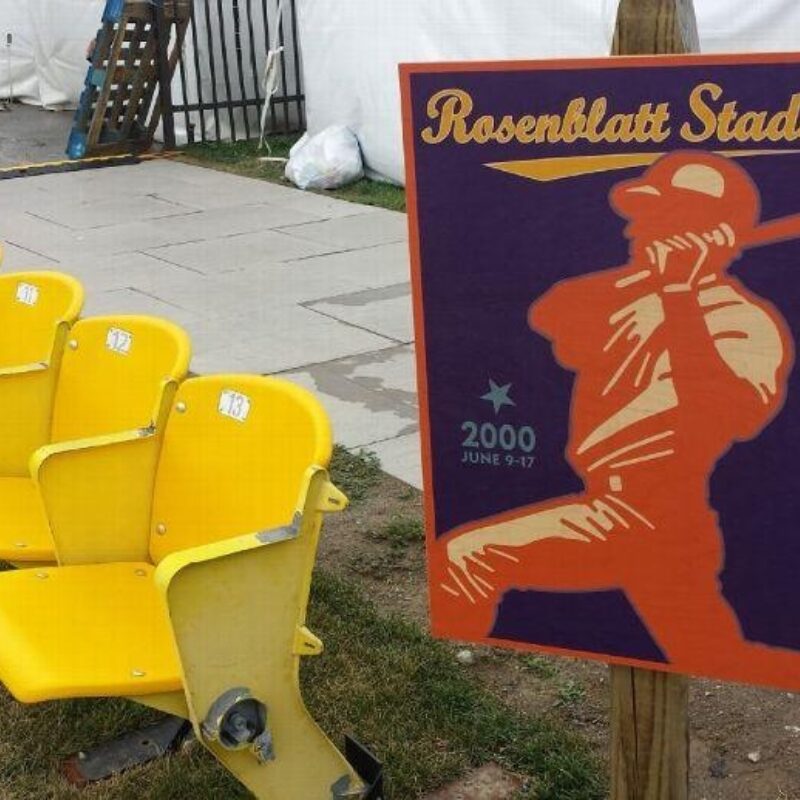 OMAHA, Neb. -- It was late night -- check that, early morning -- after Friday night's Game 12 showdown between Arizona and Oklahoma State. The contest had moved at the speed of a Tatooine sandcrawler, the clock trudging toward 1 a.m., and I was starving.

On the far edge of the tent city fan zone that surrounds TD Ameritrade Park, I found a food truck. It sold hamburgers and Diet Mountain Dew, so I bought one of each. Then I took a seat on a park bench alongside Cass Street to eat my food and watch overserved College World Series fans stumble out into the night, set to the thumps of an '80s cover band banging away from whence those thirsty patrons had emerged.

I'm going to be honest with you here. I was a little sad. I'm always a little sad when I cover the College World Series, though it is and will always be one of my favorite assignments of the year.

I miss Rosenblatt Stadium. And I know I'm not alone.

The flag poles that used the stand outside the Rosenblatt Stadium entrance now live in the sea of merchandise tents across the street from TD Ameritrade Park.

After six years on the job, the still-new downtown ballpark is slowly coming into its own. In 2011, its first year in business, it was little more than an oasis in a sea of parking lots. Now there are bars and businesses where ticket-holders can hang out between games. The most popular of those places is named The Blatt. Downstairs from The Blatt's party porch, there's a Zesto's window serving signature milkshakes and hamburgers (it was closed by the time I'd stopped by Friday night).

However, even the biggest proponents of the new digs have to admit that there's a spirit missing that hasn't quite made its way north from the old stadium on the hill, the one that used to stand at the corner of S. 13th Street and Bob Gibson Boulevard.

That would be the spirit of Johnny Rosenblatt.

That's what I thinking as I sat there Friday night at precisely the moment that I tossed my tin foil wrapper into a garbage can and looked up to try and figure out where I was. Wait ... I was on 13th Street? Yes I was.

Then I realized that the city bench I was sitting on didn't feel like a city bench at all. Wait ... was this ... aluminum? Yes it was. And there was a number painted on that metal.

Then I looked up and realized that I was also sitting beneath a line of nine flagpoles, one featuring Old Glory and the other eight flying the colors of the eight participants in this year's College World Series. Wait ... were these ... ? I instinctively stood up, walked enough paces to give myself a wider view, and a revelation washed over me.

Yes, they were! They were the flagpoles that once stood watch at the entrance to Rosenblatt Stadium. I'd interviewed coaches beneath these flagpoles. I'd eaten between-games hot dogs with my father beneath the flagpoles. And then I realized that the bench I'd been sitting on was actually a section taken from the infamous Rosenblatt general admission outfield bleachers.

Suddenly, I felt like Robert Langdon in "The Da Vinci Code." (Though I don't remember any drunk tank top bros nearly barfing on Tom Hanks's shoes at The Louvre, as happened to me by the aluminum bench.)

I found a small plaque posted beside the bench, totally lost in the darkness, upon which was inscribed: "Original 9 Flagpoles and Bleacher from Rosenblatt Stadium circa. 1960. Baseball fans can still enjoy a piece of Omaha's baseball history at Omaha Baseball Village 'The New 13th Street.'"

Omaha Baseball Village? Is that what all those tents are called? Hidden amid the endless white canvas is a building meant to serve as a souvenir and sponsor showcase, an effort to replicate the old homes surrounding Rosenblatt Stadium, those originally rented by Omaha Stockyard meatpackers but every June occupied by the likes of barbecue joints and Nike to sell 'cue and shoes.

Scattered around the old warehouse were random rows of familiar plastic yellow, red and blue seats. They were salvaged from Rosenblatt after its demolition in 2012. When I returned to the Village the following day, an exhausted grandfather had three young children lined up in a section of those seats, desperately handing them snow cones in an effort to calm them down.

"Are they really from Rosenblatt?" Henry Hamilton replied when I told him, clearly happy that another adult had spoken to him amid his babysitting nightmare. "Well, I guess I should be worried about my grandchildren getting grape syrup all over them ... but I bet they've had a lot more than that spilled all over them before, huh?

"You know, one of my sons told me that my grandson just played in a baseball tournament at a park with some Rosenblatt seats. Columbus Park, you should look it up ..."

I did. Henry was right. Columbus Park, located just a little south of downtown, was one of a long list of parks that hosted youth baseball tournaments during Series week. Its tiny grandstand, which seats maybe 50 parents, is dotted with Rosenblatt seats, and its batting cages are lined with artificial turf once used in Rosenblatt's batting cages.

A very nice woman who answered the phone at the Omaha Parks & Recreation offices told me that if I wanted to I could probably spend a whole day driving around to city parks that were using repurposed Rosenblatt Stadium gear, including a few ball yards where Rosenblatt himself, then a young salesman, played for semi-pro teams such as the Murphy Did-Its and the Omaha Buffaloes (sometimes he appears as Johnny Ross in the box scores, a pseudonym to duck the occasional anti-Semite). More seats, scoreboards and stadium infrastructure are scattered from Boys Home to Burke High School to North Omaha's Fontenelle Park, Johnny Rosenblatt's original choice to host professional baseball and the College World Series (residents balked after saying it would be too noisy ... bad move).

Soon-to-be city councilman and future mayor Johnny Rosenblatt formed a stadium committee to helm that effort. His partner in that effort was a man named Eddie Jellen, but Jellen was killed in action in World War II. When Memorial Stadium opened on October 17, 1949, (it wouldn't become Rosenblatt Stadium for another 15 years), Jellen's name was one of 40 names immortalized on a big bronze plaque at the entrance of the stadium: AMATEUR BASEBALL PLAYERS WHO GAVE THEIR LIVES IN THE SERVICE OF THEIR COUNTRY.

Now that plaque -- along with, yes, some Rosenblatt seats -- is featured at Brown Park, a couple of miles down the Missouri River from where they used to be part of a much larger facility.

On Sunday morning I drove from Brown Park up, yes, 13th Street, and arrived at that site, the one on the hill that looks toward Stadium View Sports Cards to the left, Iowa and the Henry Doorly Zoo to the right. I hadn't been there since 2011, the year that Rosenblatt Stadium sat empty while TD Ameritrade was christened.

I've always regretted going that year. The most immaculate playing field in Nebraska was covered in weeds. The pedestal out front was empty. The platform where the "Road To Omaha" statue once stood was topped by a Coors Light can and an old McDonald's bag. There was a giant chain link safety fence wrapped around the place and construction dumpsters were in place to start pulling Rosenblatt apart, piece-by-piece.

So Sunday, as I crested the hill where the original Zesto's once stood, I instinctively winced.

Then I saw the sign. The unmistakable black arch with the tall white words: "ROSENBLATT STADIUM." It used to sit atop the giant left-field scoreboard, greeting you as you came down the teen-numbered streets from downtown, or as fans crawled through off-ramp traffic from I-80.

Now it dominates a tiny diamond that sits squarely in the center of what used to be the playing field of Rosenblatt Stadium, removed from the scoreboard that still stands in the distance, now a billboard for the zoo. That diamond sits squarely in the middle of a city block of concrete, as if the old ballpark was zapped with something from the tool chest of Ant-Man. Just like the place that replaced it downtown, it is an oasis in a sea of parking lots.

They call it Johnny Rosenblatt's Infield at the Zoo. It's a Whiffle Ball field, lined with bricks taken from the entrance of the old ballpark and garnished with signs telling the history of that park. It is all, naturally, adorned by more of those signature rainbow seats.

This morning a young mother occupied one of those seats, carefully changing a diaper on her youngest baby who was laid out in another. Her two oldest kids ran around the little green field, screaming and giggling.

Her name was Janet McKinnon and she was from Papillion, Nebraska. Her children played on the spot once known for college baseball's Gorilla Ball era, but they were there to see the actual gorillas next door.

"These are original seats from Rosenblatt aren't they?" she said to me. "You know I came to games here with my dad when I was about my kids' age. I was here when the guy from LSU hit the home run."

"Warren Morris in 1996?" As I asked it, I pointed to the edge of the zoo's "Cheetah Lot," where the right-field foul pole still stands.

"Yeah, that was it. I was so little, I don't really remember it. But Dad has always bragged about that. Who knows? Maybe these were the seats we were in."

As the McKinnons departed for the zoo, that thought made me smile. It made Johnny Rosenblatt smile. I know because I could see his photo from where we talked, perpetually looking over what's left of his beloved ballpark. His photo is also in the concourse at TD Ameritrade Park. It can also be found in the suburbs at Werner Park, home of the Omaha Storm Chasers, the minor league team that used to call Rosenblatt Stadium home.

Johnny's always there. He's always everywhere in Omaha. So are pieces of his beloved ballpark. You just have to know to where to look.